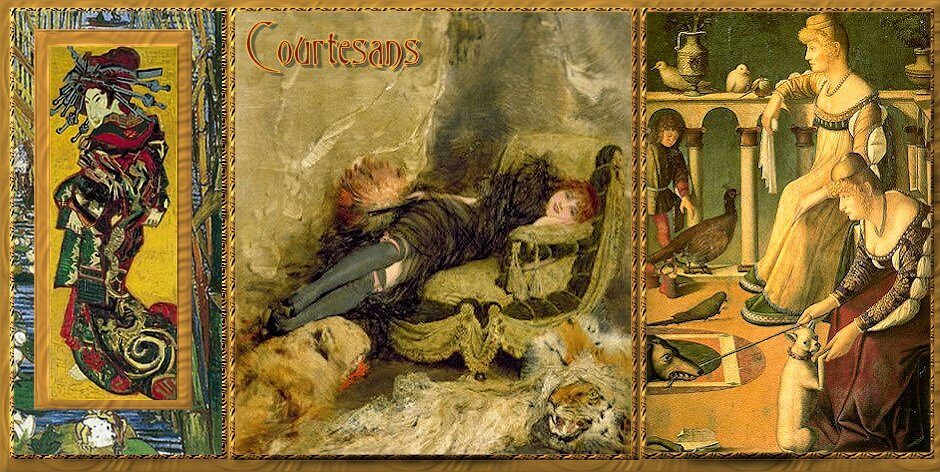 The origin of the word ‘Courtesan’ –  the word Courtesan, also written as courtezan, meaning prostitute, stems from Middle French ‘courtisane’, from Italian cortigiana “prostitute,” literally “woman of the court” (a mock-use or euphemism) or cortigiano “one attached to a court,” from corte “court,” from Latin cortem.

The term originally meant a courtier, a person who attends the court of a monarch or other powerful person. A member of the papal curia” (early 15c.),

In a feudal society, the court was the centre of government as well as the residence of the monarch. Social and political life here were often completely mixed together. Prior to the Renaissance, courtesans served to convey information to visiting dignitaries, when servants could not be trusted.

In Renaissance Europe, courtiers played an extremely important role in upper-class society. It was customary during this time for royal couples to lead separate live. They usually married simply to preserve bloodlines and to secure political alliances. Therefore men and women would often seek gratification and companionship from people living at court. In fact, the verb ‘to court’ originally meant “to be or reside at court”. Later it came to mean “to behave as a courtier” and then ‘courtship’, or “to pay amorous attention to somebody”. The most intimate companion of a ruler was called the ‘favourite’

In Renaissance usage,  the Italian word cortigiana, feminine of cortigiano (“courtier”) came to refer to a person who attends the court. This then developed to refer to a well-educated and independent woman, eventually a trained artist or artisan of dance and singing. In particular a woman who was associated with wealthy, powerful, or upper-class society and who was given luxuries and status in exchange for entertainment and companionship.The word was borrowed by English from Italian through the French form courtisane during the 16th century.

A male figure comparable to the courtesan was the Italian cicisbeo, the French chevalier servant, the Spanish cortejo or estrecho.